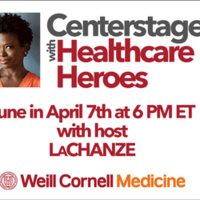 In this live interview series Centerstage with Healthcare Heroes, Weill Cornell Medicine physicians will pair with Broadway favorites in order to explore the intersection of health, wellness, and theatre.

The series can be watched live from the Playbill website or their Youtube channel. For more details on the series, go to https://www.playbill.com/article/centerstage-with-healthcare-heroes-returns-with-lachanze-abby-mueller-and-rory-omalley