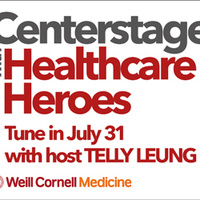 Though Broadway remains closed in NYC, Weill Cornell Medicine (WCM) has partnered with Playbill to bring some of Broadway’s best right to you. The first-ever Q&A featuring Broadway Stars and Healthcare Heroes.

WCM and Playbill are launching the inaugural series featuring panel discussions in which Broadway stars interview WCM physicians on various trending health, wellness and COVID topics. You will get a “front row seat” to watch and interact with the physicians during the livestream, so come prepared with questions during the virtual Q&A.

Kicking off the three-event series will be acclaimed Broadway actor Telly Leung, hosting a panel of Sean Parker Institute for the Voice physicians on the topic of Caring for Your Voice, on July 31, 2020, 5:30pm – 6:30pm ET. The event will be free to watch on Plalybill.com or on Playbill's Youtube channel.

Leung starred in Broadway’s “Aladdin” and “ALLEGIANCE,” and has appeared on television in “Glee.” Leung will speak with three WCM physicians on the best ways to take care of the voice.

The next two Q&A discussions will address:

What: The Broadway Q&A Series